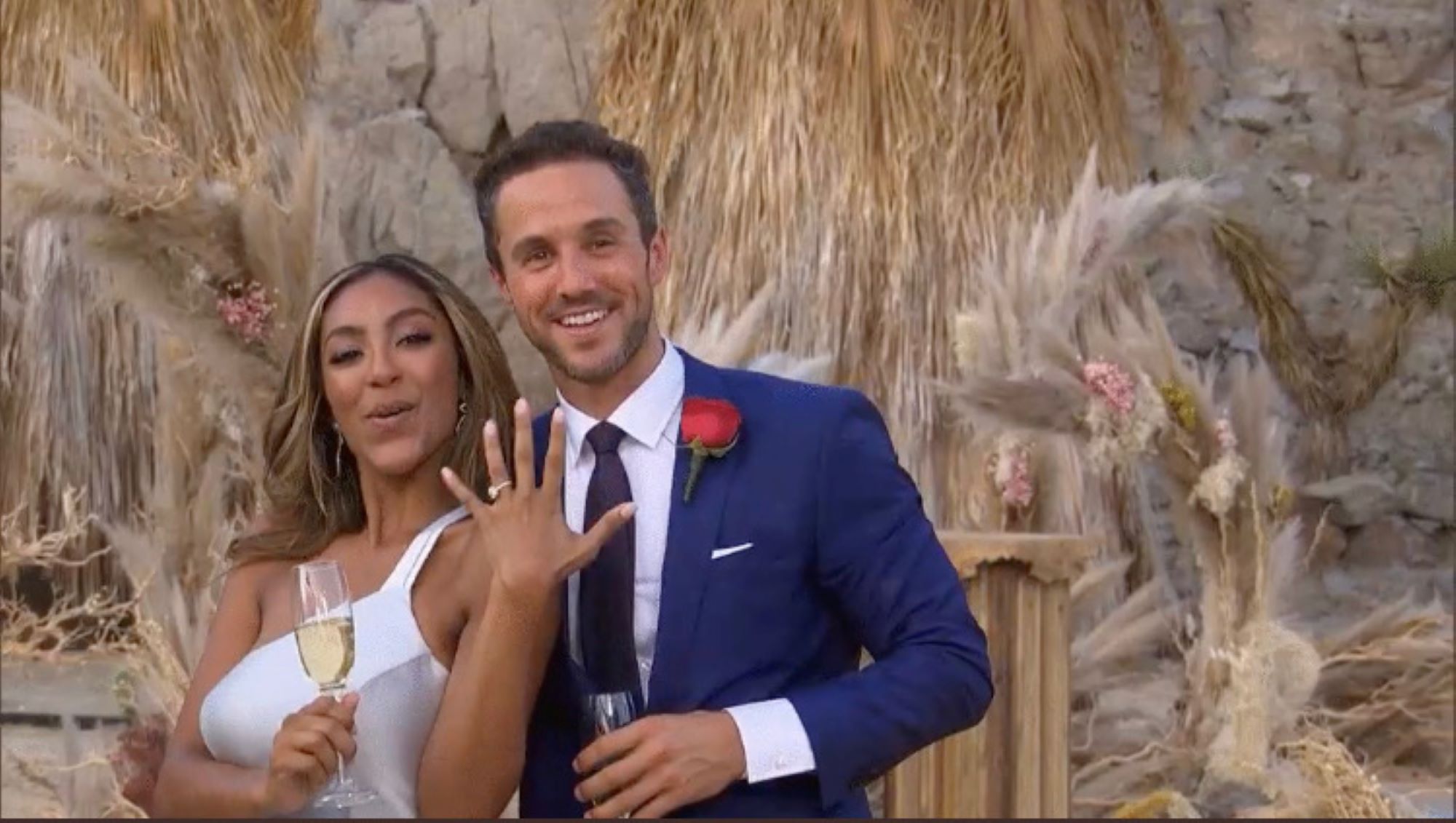 It wasn’t the most dramatic season of “The Bachelorette” yet, but Season 16 was the most authentic by far.

In part two of the finale, Tayshia did something few leads had done before: Lean on her suitors during tough times, and let them carry her through the finish line. As a proposal came closer and closer, Tayshia’s worst fears, her previous divorce, couldn’t be ignored.

It was that moment of self doubt that solidified Zac would be there for her, no matter what.

I won’t lie, I cried during the proposal.

Here’s how Tayshia and Zac Clark ended up togther on the finale of “The Bachelorette.”

Tayshia thought the second-to-last rose ceremony would be easy: She had two roses, one for Zac and one for Ivan. But then Ben, who she had sent home the week before, showed up to profess his love for her.

Tayshia, annoyed that Ben dropped this bomb on her a little too late, allowed him to stay for the rose ceremony. And then they shared one of the most passionate kisses I’ve ever seen.

Tayshia got down to business quickly, pulling Ivan away from the other guys. “There are some things that kind of posed concern,” she told him. During their overnight date, they discussed religion, (Tayshia is Christian, Ivan’s faith is unknown) and Tayshia realized they couldn’t make a life together work. Zac and Ben both got roses. Hello to our final two.

Her dad, Desmond, her mom, Rosario, and brothers Brice and Desmond Jr. came to Palm Springs to help her make her big decision.

Desmond was stunned that Ben was sent home but came back. Over drinks, Ben joked about getting dumped by Tayshia, as Rosario made eyebrows. “I don’t want you to work so hard to have somebody on the same page as you,” Desmond told his daughter in a private chat.

Seperately, Ben told her mom and dad how much he loves their daughter and why he wants to be in her life. “He really acknowledged where he messed up and how he could have done better,” Desmond said, seeming to approve of Ben.

Tayshia was sold. “I started to fall in love with Ben all over again,” she said.

Zac told Rosario that he’s in love with her daughter, and that Tayshia loves him back. He also revealed that he’s eager to start a family with her.

Like Tayshia, Zac has been married before, something he didn’t hide from Desmond. “I don’t want this to be a test, I don’t want you to wing it and see if you can make it work,” he told Zac. “Supporting each other through these tough times is what I look forward to,” Zac assured him.

“I like Zac, he’s a good man. Just to see another man be in love with my daughter, the way he expressed himself, made me be at ease,” Desmond told the cameras after the meeting.

“Zac seems very honest and caring, the chemistry was actually something that I noticed,” said Rosario.

The next morning, her dad stopped by Tayshia’s villa. “Frankly, I’m worried, I’ve seen you hurt before,” he told his daughter, talking about Tayshia’s divorce. Both guys were perfecly fine, but rushing into an engagement wasn’t. “You could be making the biggest mistake of your life,” he warned, giving the producers a perfect sound bite.

The conversation with Tayshia’s dad loomed over her as Zac promised her he was ready to propose. The couple headed to dance class, where they learned a proper first dance for a wedding. She couldn’t shake her worries, but Zac helped her have some fun throughout the lesson.

At night, Tayshia let her anxieties loose. What if something changes, and Zac doesn’t want her anymore? He assured her that no matter what, he’s not going anywhere.

“I know what my heart wants, and it’s not Ben,” she told the cameras, before they were supposed to go on their final date. Sitting down with him in his home, she told him that her heart is with somebody else.

“I was excited to be back, I was really hopeful that we would be together,” he said. “When you love somebody, you want them to be happy.” It was his second breakup with Tayshia, and no less devastating than the first. “I lost a really good thing,” he told the cameras. “Our life would have been so good.”

The big send off. ABC

Even though she knew the man of her dreams was waiting for her with a ring, Tayshia started to have doubts, crying from excitement and nervousness. Chris Harrison left her off with a hug and an “I love you.”

As Zac approached the alter, Tayshia greeted him with a giggle. “The first conversation we ever had by our fountain, we talked about how everything happens for a reason. I came here because I was supposed to meet you, I came here because I was supposed to fall in love with you,” Zac told her. “Nothing has ever felt so right in my entire life. I love you Tayshia. We spoke of the importance of loyalty, and I will always be loyal to you.”

Tayshia responded in kind. “I know that I told you that I love you, but it’s more than that. It’s this wild, wild love that I’ve tried to come up with so many reasons to not believe, and you have truly made me believe that there doesn’t have to be flaws, and that I deserve love with a man who won’t run away. I love you Zac Clark.”

Tayshia was sobbing as Zac got down on one knee. She whispered a resounding ‘yes,’ before they collapsed into each other’s arms.

Of course, it wasn’t official until Zac accepted the last rose from her. They two rode off into the sunset in a fake taxi cab, headed to New York City.

Bachelor Nation, I’ll see you on January 4, when this hell year is over and Matt James’ season of “The Bachelor” premieres.